These large datasets have been collected from multiple regions including the hippocampus, thalamus, frontal cortex and medial prefrontal cortex.

All datasets are available on CRCNS.ORG.

We are working on a meta-data database describing these datasets and many other datasets collected in the lab. You can see the database here and download the datasets directly from our webshare.

Simultaneous intracellular and extracellular recordings from hippocampus region CA1 of anesthetized rats. [about]

The data consists of simultaneous intracellular and extracellular recordings in the hippocampus of anesthetized rats. Experimental procedures as well as major results are described in:

These data are useful as a benchmark for spike detection and sorting (see paper by Harris et al., for some of the methodology). 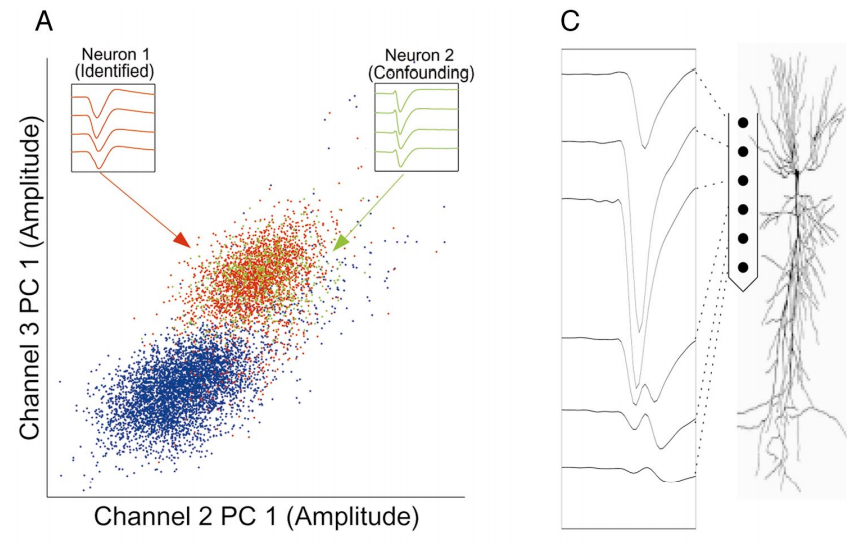 Multi-unit recordings from the rat hippocampus made during open field foraging. [about]

The data set contains multichannel simultaneous recordings made from layer CA1 of the right dorsal hippocampus of three Long-Evans rats during open field tasks in which the animals chased randomly placed drops of water or pieces of Froot Loops while on a elevated square platform.   Data for 21 experiments are included.  The duration of the experiments ranged from about 17 minutes to 1 hour 46 minutes.  Total time for all experiments is about 19 hours.  The raw (broadband) data was recorded at 20KHz, simultaneously from 31 to 64 channels.  The raw data was processed to extract the LFPs (Local Field Potentials) and detect spikes. Included in the data set are the following items: 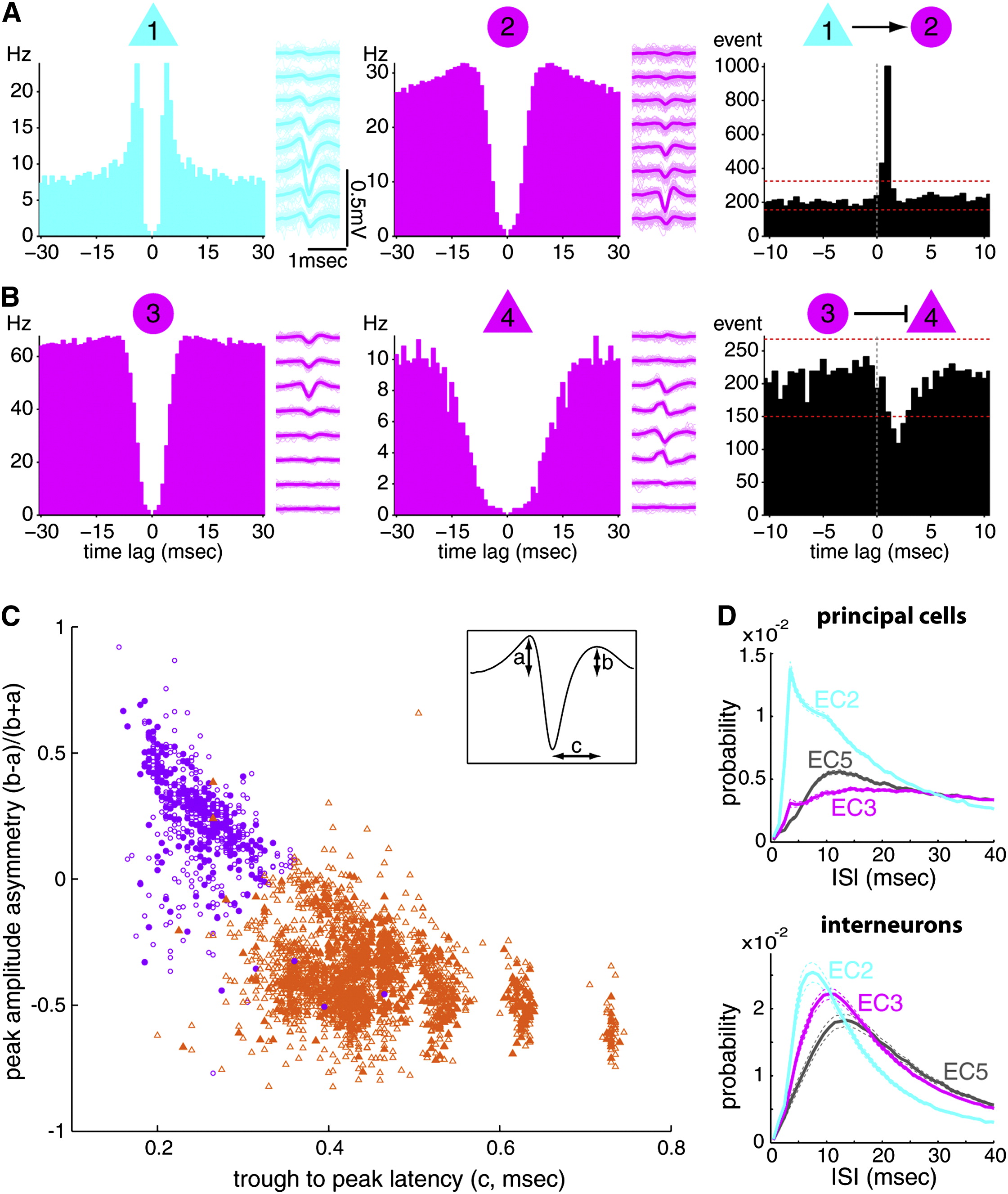 Multiple single unit recordings from different rat hippocampal and entorhinal regions while the animals were performing multiple behavioral tasks. [about]

The data set contains recordings made from multiple hippocampal areas in Long-Evans rats, including: Cornu Ammonis: CA1 and CA3; dentate gyrus (DG), and entorhinal cortex: EC2, EC3, EC4, EC5.  The data was obtained during 442 recording sessions and includes responses of 7,737 neurons in eleven animals while they performed one of fourteen behaviors.  Total time for all experiments is 204.5 hours.   The raw (broadband) data was recorded at 20KHz, simultaneously from 31 to 127 channels.  The raw data was processed to extract the LFPs (Local Field Potentials) and detect spikes. Included in the data set are the following items:

A fuller description of the data set is in crcns-hc3-data-description.pdf

Several publication based on some of the data are: 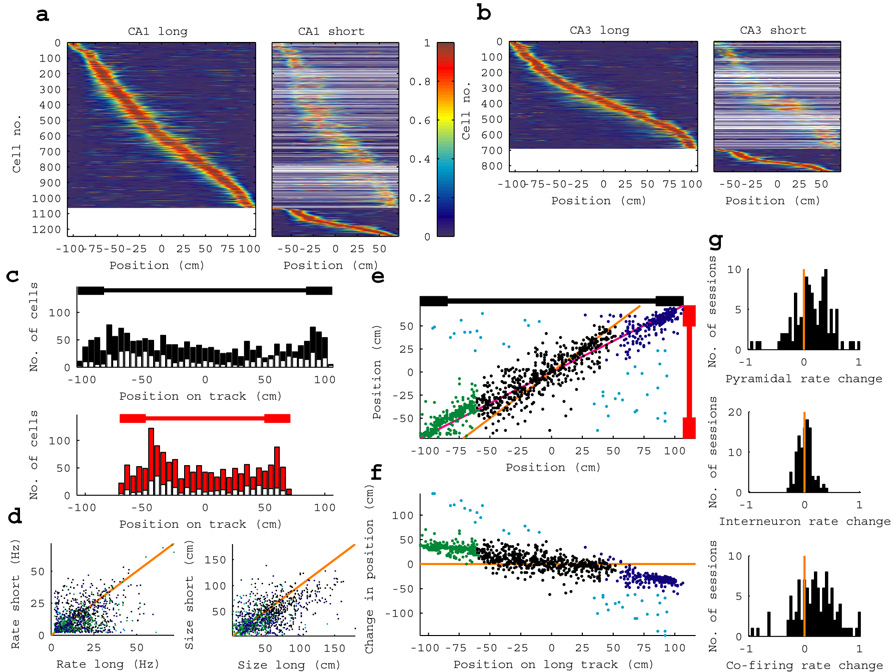 Extracellular recordings from muiti-site silicon probes used for clustering of neuron responses in rat hippocampal and entorhinal regions. Contains additional data (including raw data) used for spike sorting of some neuron responses provided in the hc-3 data set. [about]

The data set contains raw data that is associated with sessions in the hc-3 data set, but not included in that data set. The relationship between the hc-3 and hc-4 (this) data sets are as follows:  In the hc-3 data set, for each electrode placement, the data set typically contains only a subset of the sessions recorded (usually sleep sessions are not included), and also no original broadband data is included.   The corresponding data in the hc-4 data set includes all the sessions and the broadband raw data used to detect putative spikes, as well as all of the derived data used to do the spike sorting. Because the broadband data is very large, so far, data corresponding to only one electrode placement are included.

Simultaneous extracellular recordings from left and right hippocampal areas CA1 and right entorhinal cortex from a rat performing a left / right alternation task and other behaviors. [about]

The data set contains recordings made using a silicon probe from three areas from a single rat that was performing different behavioral tasks.  The three regions recorded from are left and right hippocampal CA1 and right entorhinal cortex.  The tasks are a left/right alternate selection task, wheel running, and platform exploration.   The neural data was recorded on 125 channels. Included in the data set are the following items:

Several publication based on some of the data: 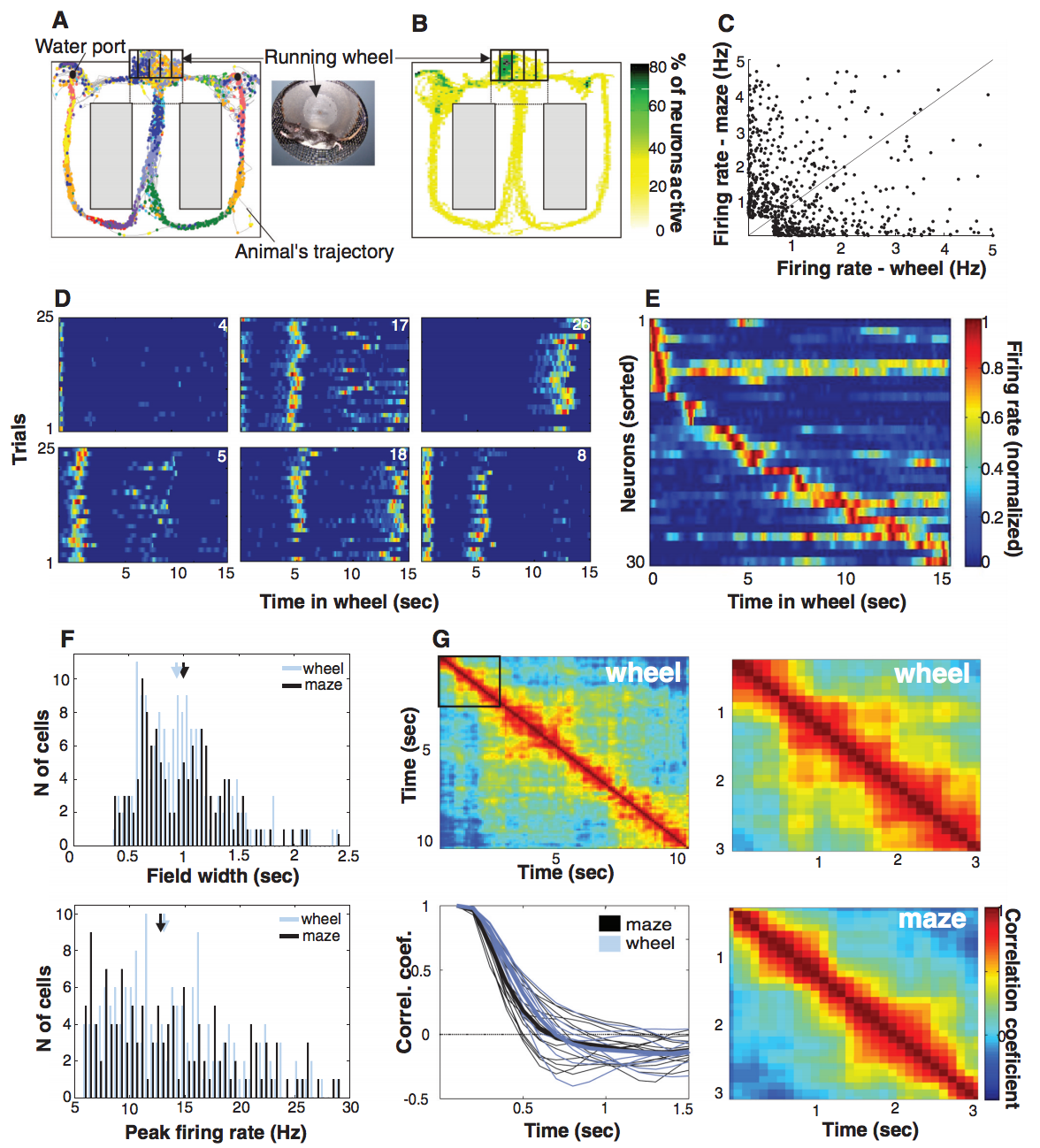 Recordings from hippocampal area CA1, PRE, during and POST novel spatial learning. [about]

This data set is composed of eight bilateral silicon-probe multi-cellular electrophysiological recordings performed on four male Long-Evans rats. These recordings were performed to assess the effect of novel spatial learning on hippocampal CA1 neural firing and LFP patterns in naïve animals. Each session consisted of a long (~4 hour) PRE rest/sleep epoch home-cage recordings performed in a familiar room, followed by a Novel MAZE running epoch (~45 minutes) in which the animals were transferred to a novel room, and water-rewarded to run on a novel maze. These mazes were either A) a wooden 1.6m linear platform, B) a wooden 1m diameter circular platform or C) a 2m metal linear platform. Animals were rewarded either at both ends of the linear platform, or at a predetermined location on the circular platform. The animal was gently encouraged to run unidirectionally on the circular platform. After the MAZE epochs the animals were transferred back to their home-cage in the familiar room where a long (~4 hour) POST rest/sleep was recorded. All eight sessions were concatenated from the PRE, MAZE, and POST recording epochs. In addition to hippocampal electrophysiological recordings, neck EMG and head-mounted accelerometer signals were recorded, and the animal’s position during MAZE running epochs was tracked via head-mounted LEDs.

Some publications based on all or parts of these data are: 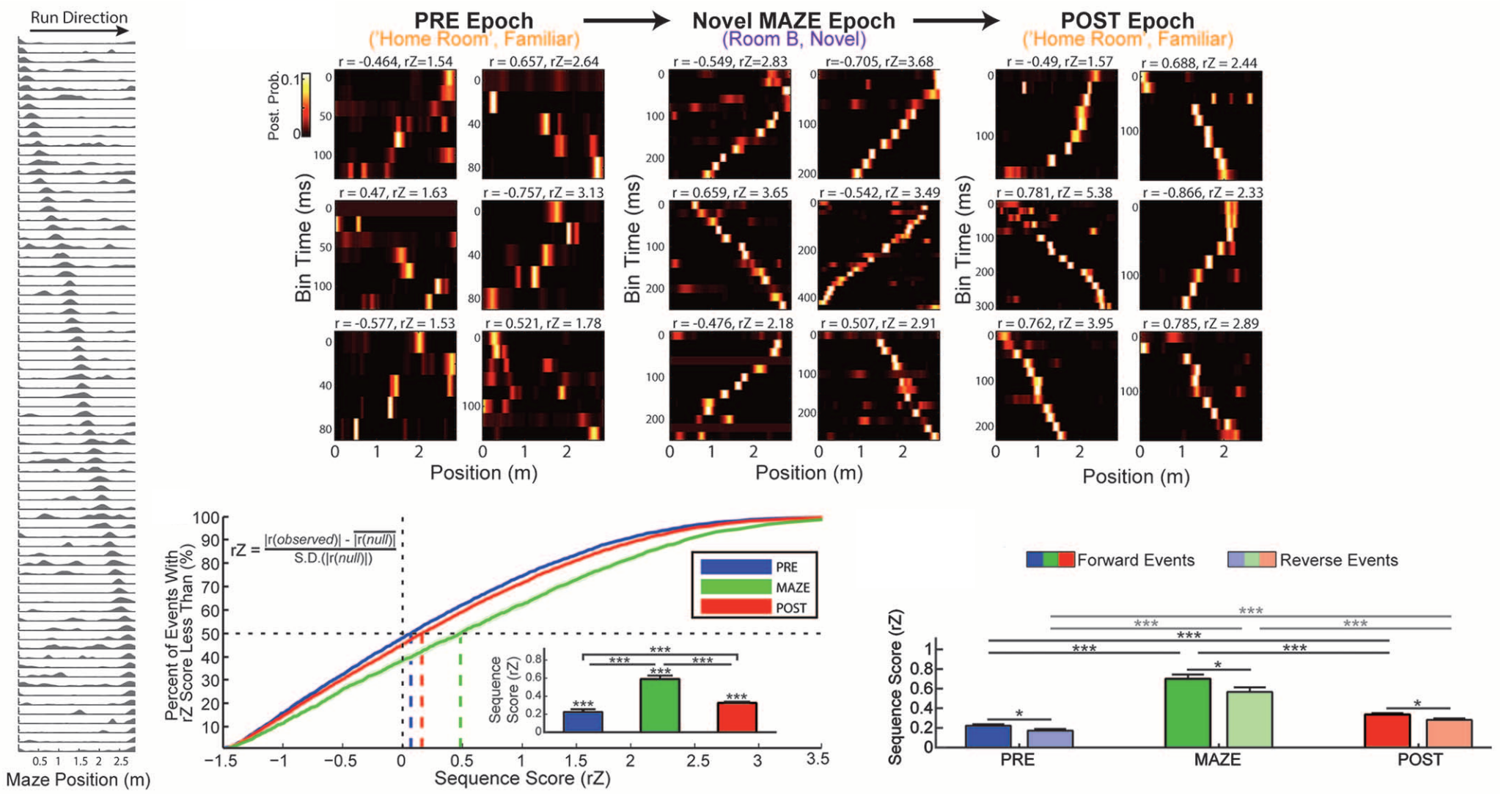 The data set contains simultaneous recordings from 4 rats in the dorsal hippocampus and amygdala (including BLA, CeN and neighboring nuclei and structures such as piriform cortex.) during sleep and behavior. Histological reconstructions are provided as maps with corresponding structure for each electrode shank (8-shank Neuronexus silicon probes) and recording day.

The behavior consists of running on a linear track for water rewards. In one location and one direction, an aversive airpuff is delivered. The location and direction change everyday in a pseudo-random manner.

Each session consists of a track training session preceded and followed by sleep and rest in the homecage. At the beginning and end of each daily recording, a test is recorded with the animal running a few laps on the track without airpuff.

This dataset contains:
– Filtered LFP files at 1250Hz (134 or 166 channels)
– Sorted Spike information as given by the Neuroscope suite, KlustaKwik followed by manual sorting.
– Videos (tracking by LED on the animal’s head) and position files.
– Events for ripples, airpuffs and rewards in the Neuroscope format (.evt)
– xml files for channel ordering and descriptions.

The data is organized in folders per animal and session (1 session/day).

A set of analysis and thorough description of the dataset and methods are described in:
G. Girardeau, I. Inema, G. Buzsaki. Reactivations of emotional memory in the hippocampus-amygdala system during sleep. Nature Neuroscience (2017) doi: 10.1038/nn.4637. 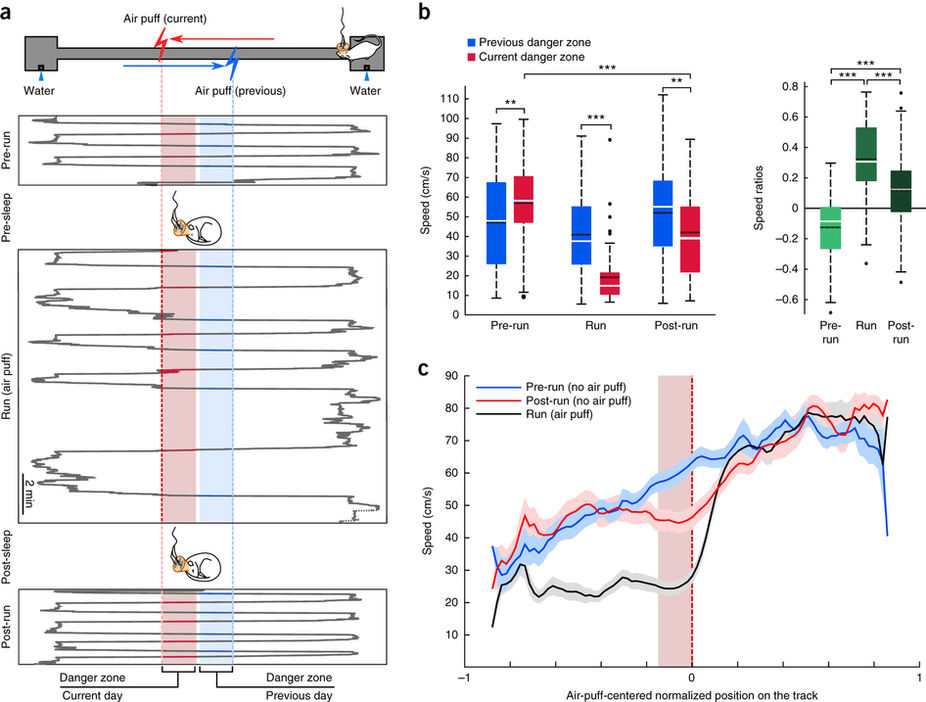 Extracellular recordings from multi-site silicon probes in the anterior thalamus and subicular formation of freely moving mice. [about]

The data set contains recordings made from multiple anterior thalamic nuclei, mainly the antero-dorsal (AD) nucleus, and subicular areas, mainly the post-subiculum (PoS), in freely moving mice. Thalamic and subicular electrodes yielding high number of the so-called Head-Direction (HD) cells were likely to be located in the AD nucleus and the PoS, respectively. Electrode placement was confirmed by histology.

The data was obtained during 42 recording sessions and includes responses of 720 neurons in the thalamus and 357 neurons in the PoS, in seven animals while they foraged for food in an open environment (53- x 46-cm).  Three animals were recorded simultaneously in the thalamus and the PoS (21 sessions). In the four other animals, electrodes were implanted in the anterior thalamus and in the pyramidal layer of the CA1 area of the hippocampus but only to record Local field Potentials (LFPs). The raw (broadband) data was recorded at 20KHz, simultaneously from 64 to 96 channels.  The raw data was processed to extract the LFPs and detect spikes. Included in the data set are the following items:

More information is given in document: crcns_th-1_data_description.pdf and in the following publication which is based on this dataset: 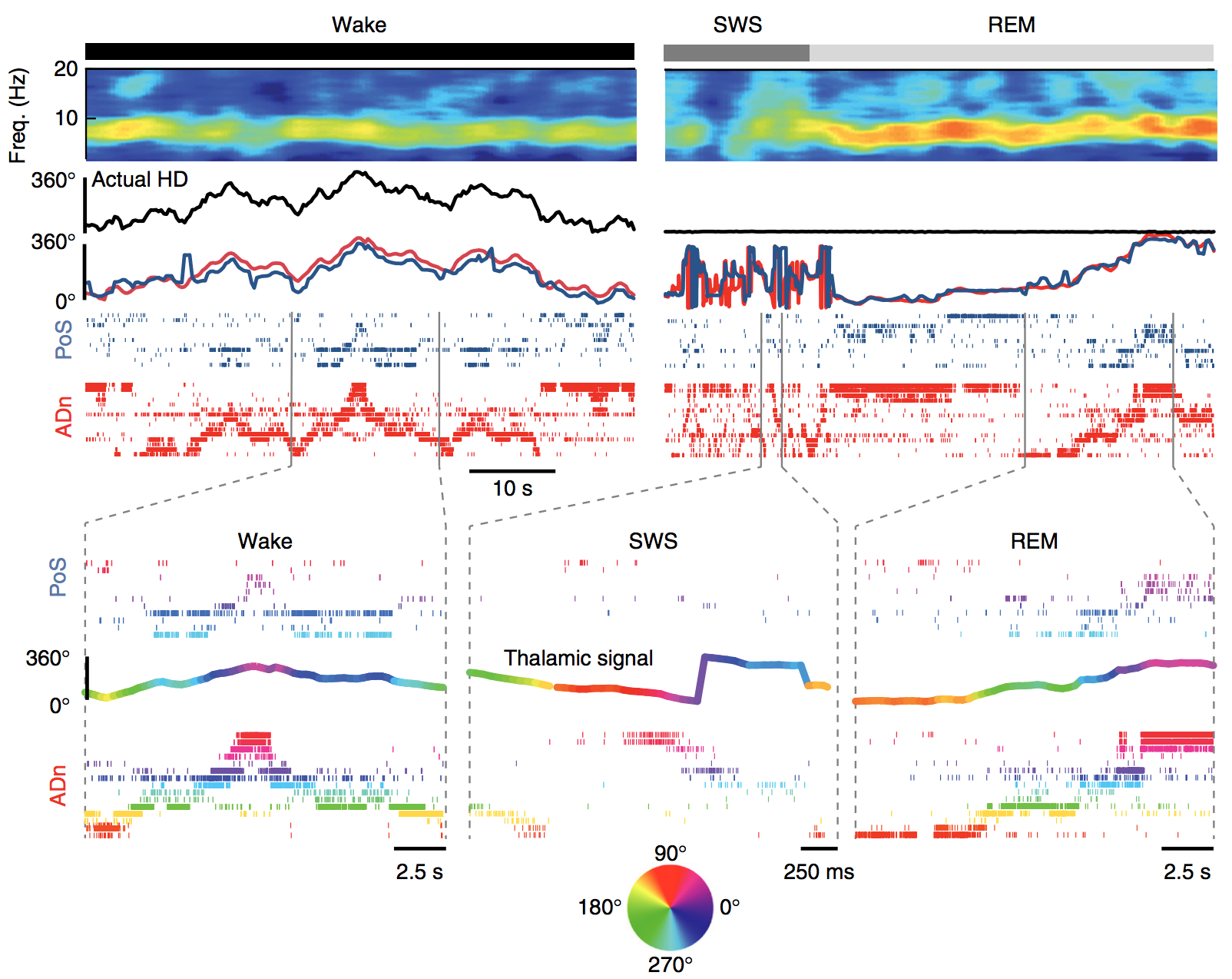 This data was recorded using silicon probe electrodes in the frontal cortices of male Long Evans rats between 4-7 months of age. The design was to have no specific behavior, task or stimulus, rather the animal was left alone in it’s home cage (which it lives in at all times). Data includes both local field potentials (LFP) and spikes. 11 total animals, 27 recording sessions, 1360 total units recorded, 1121 units considered stable, 995 putative excitatory units and 126 putative inhibitory units. Only recordings including a “WAKE-SLEEP” episode wherein at least 7 minutes of wake are followed by 20 minutes of sleep. On average 2 such WAKE-SLEEP episodes per recording session. The data is used in the following publication: 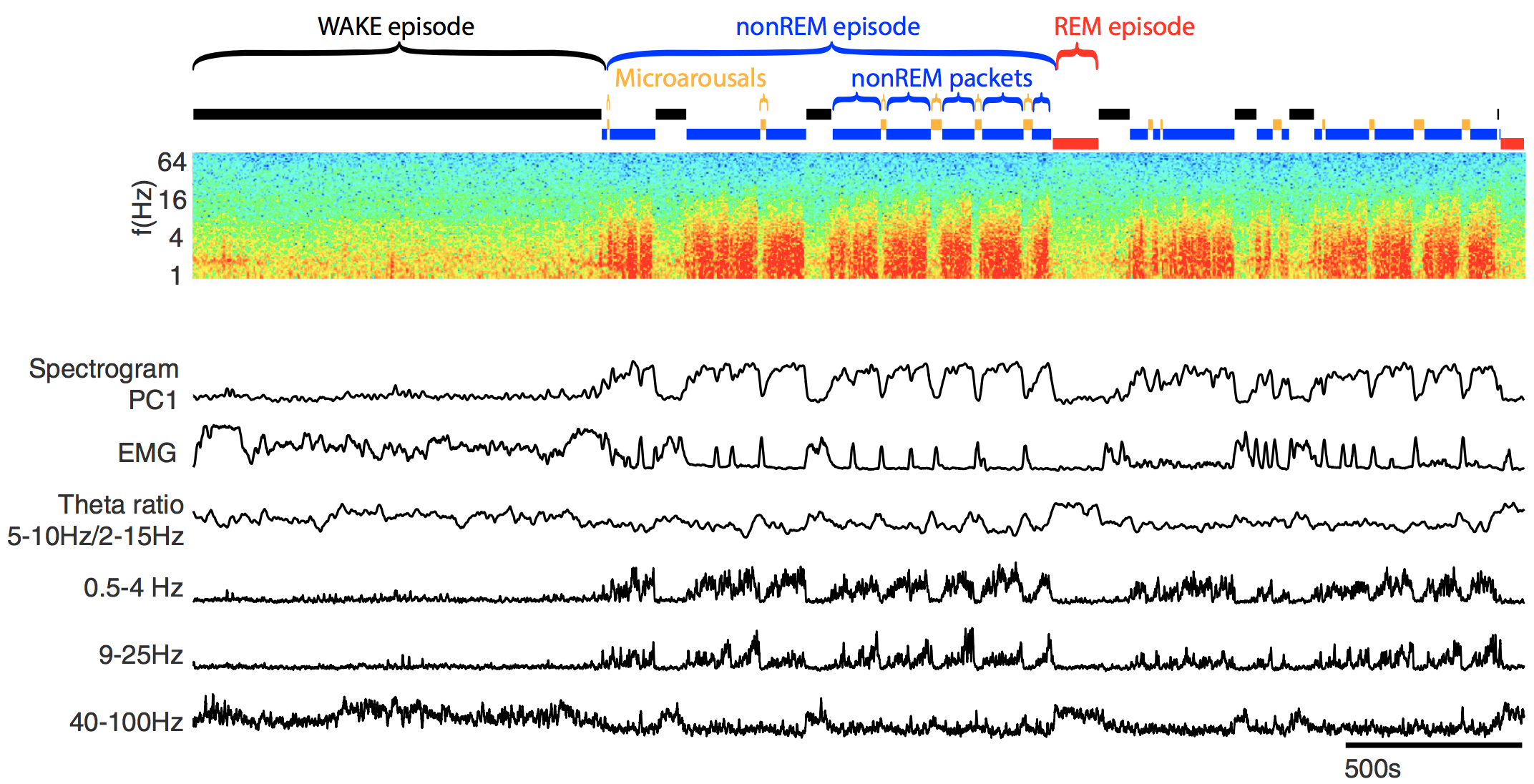 Simultaneous electrophysiological recordings of ensembles of isolated neurons in rat medial prefrontal cortex and intermediate CA1 area of the hippocampus during a working memory task. Recorded by Shigeyoshi Fujisawa. [about]

This dataset of multi single neuron recording was acquired from three rats (EE, FF, GG) while performing a working memory task. Neuronal activity was monitored simultaneously in the PFC (64 channels) and the intermediate CA1 (32 channels) of the hippocampus. In one rat (EE), sleep was also recorded before and after the task. Details of the task were described in:

The data was obtained during 52 main recording sessions and nine short test sessions.  The total duration of all the sessions is about 23.37 hours.  The raw (broadband) data was recorded at 20KHz.  The raw data was processed to extract the LFPs and detect spikes. Included in the data set are: